Not to be confused with worlds.

Biomes are special environments or dimensions accessible by dwarfs through an improved portal already built in a world.

Biomes are good for farming, as some resources collected there can be transferred to the world. There is also some unique loot that can only be acquired in biomes.

Biomes are also the first multiplayer enviromnent of the game (not requiring any DLC), and are the only way to play PvP matches in Craft the World.

Some monsters can only be found in specific biomes.

Biomes can be played in single player, PvP or coop.

A popup window will show the following options:

To be sure to play a biome in single player mode:[1]

Six is the maximum number of dwarfs in a biome. They are choosen randomly from the original world and travel to the biome keeping their name and skills, but they arrive in the biome with no armor or equipment.

Dead dwarfs are gone for good, however, if there is a Soul Keeper set up at home, the player can resurrect them once leaving the biome.

If a dwarf dies there is a button at the top of the UI to bring another dwarf from home.

Rules to all biomes: 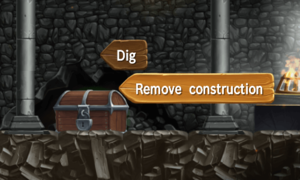 The chest in the Forest Biome

Each biome has a specific goal to be acomplished. This goal always consists in removing a construction that is protected or surrounded by special creatures. Completing the challenge awards the player with some of the possible biome loot. This loot will be available once back to the world.

Besides the special loot, biomes are useful to ensure that there is no shortage of raw resources in worlds, even when the whole map is dug up.

To take resources from the biome, items like ingots, armors, helmets, weapons, etc. must be disassembled to the state of nuggets, because only raw resources are transferred back to the world.

There are four biomes, each one with their special creatures and loot:

There is no way to pause a game in biome. Even if playing single player. Pressing 'ESC' to open the main menu will display "Paused" in an overlay, but the in-game time does not stops at all.

And there is no way to save a game in biome. If the player quits before completing the challenge, all the progress will be lost and no resources will be transferred to the original world.

Some players though have noticed that quiting without acomplishing the challenge, but after 30 in-game minutes does allow the raw resources to be transferred.[3]