Captured yetis[1] are little dangerous[2] non-hostile creature kept prisioner by the elves in the Elven Biome.

When first found by dwarfs, most of captured yetis are behind wooden fences, like animals, while few others are being forced by ice elf spearmans' whipping to randomly dig some blocks.

When liberated by a dwarf, a captured yeti immediately starts working in dwarfs favor, carrying items to the stockpile - much like imps, one item at a time - and can occasionally engage in combat if it is attacked by the elves.

Captured yetis will easily die in conflit with elves, as the player can't control them, nor tell them to retreat. To avoid losing too much yetis, the player may consider not to make resources drop in the elves' camp. If there are items there to be picked up, and dwarfs do not take them, captured yetis may slowly one by one suicide themselves trying to pick these items.

They have pretty much the same mobility of dwarfs, being able to jump one block at a time and climb background walls. The basic difference is their speed, that is very slow, and that they cannot run nor flee when in risk of death.

It can fall from a ten block height without being hurt.

It can pass through open doors and hatches.

In slavery, captured yetis have a metalic muzzles and handcuffs.

After been released, they use a band with it's team color in the right arm. 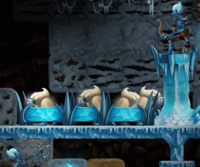 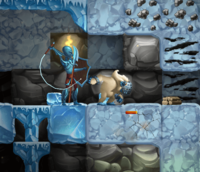 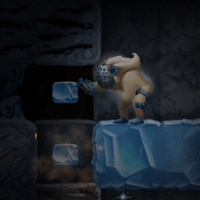 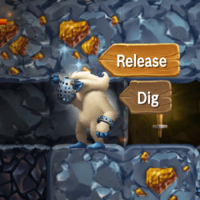 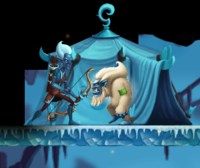 A yeti fighting an elf bowman.

There is an Steam achievement related to the captured yetis called Liberator. The player must release twenty yetis. It can be done in multiple biome battles in the Elven Biome and it doesn't matter if the yetis die.