Caterpillar[1] is a harmless[2] non-hostile creature that spawns above ground. It can be considered as the Underground World version of the sheep, because they both drop the same resources and both are completely harmless.

If caught in a trap it can then be placed in a farm and repeatedly sheared for its wool. 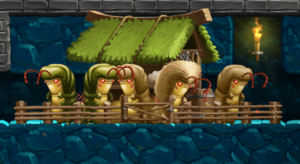 Catepillars in a farm: three stages of fur growth.

When sheared, caterpillars have their green skin exposed, making them even more similar to small caterpillars. Despite similarities in their appearence, these two creatures are as different one from another as a slug is different from a sheep.