Cave beast[1] is a little dangerous[2] semi-hostile creature that spawns above the ground in the Underground World.

Like all other animals, it can pass through open doors and hatches.

It can not climb walls, but can jump up and down three-blocks heights.

It can fall from any height without being hurt, because it's equiped with a parachute.

When hit by dwarfs and health gets lower than 20%, it tries to escape a two-blocks distance.

It floats on water, so it won't drown in normal conditions. And it swims with difficulty. In fact, while on water, it only moves when receiving an external stimulus, e.g. being hit by a dwarf. In this case it would move to retaliate or to escape, depending on the amount of helth it has.

Tamed cave beasts[3] are similar to wild cave beasts in everything, but are hostile all time and only come to Underground World through the monsters' portal. Their drop rates also changes substantially.

The bestiary displays both creatures in a same page, classifying them as "little dangerous", but trained cave beasts can be way more annoying, not only because they are hostile without being aggressed, but specially because they come in huge numbers on middle-late invasions.

The bestiary description says they are "tamed by the cave goblins". As cave goblins are never seen on the surface of the world, this note probably refers to gree cave goblins who come with cave beasts through monters' portals.

Both types can walk on two legs from time to time.

And only the wild cave beast will graze sporadically. 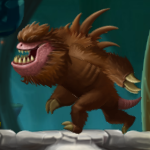 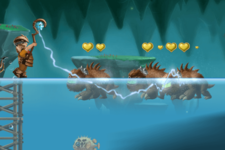