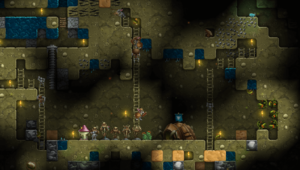 Cave goblin camps may have different layouts, but some structures are present in all camps, like:

And there is a variety of distinct structures that can appear or not around the main hut, like:

The basic structure of these camps (background and foreground blocks) are generated when the map is created. When the fog of war is removed and the area is revealed — either by dwarf's approach or by the use of the magic light — the other camp's elements are generated: constructions, goblins, captive animals, etc.