Giant spider[1] is a little dangerous[2] hostile creature found in the Forest, the Snow and the Desert worlds. There are no spiders in the Underground World, nor on any of the biomes.

Giant spiders only start spawing after the player has reached 20% of the level's total depth. This mark is usually around the beginning of the 3rd earth level. It's also usually when the player get the "Explore deep down" task done. If this task has been accomplished, spiders will certainly start appearing.

After that, they may spawn over any background block of an area that has not been visited by a dwarf for more than 5 minutes[3].

Ulike cave spirits, using torches won't make any difference for spiders. They may spawn even very close to a light focus. 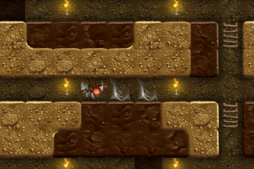 A giant spider on the 1st growth stage with nowhere to expand its web. 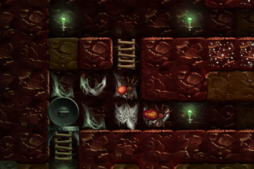 Spiders on the 1st and 2nd growth stages.

Giants spiders have three growth stages. They all have the same status though - health, speed, attack, etc.

A new web piece will be built every 40 seconds.[4]

No matter the distance from the spiders, if a dwarf remove one piece of a set of web, all spiders in this web set become immediately aggressive towards this dwarf.

Starting a new world, avoid digging around the 3rd level of earth, where you usually can find silver. This is where you shouldn't go before you have weapons and armors to deal with spiders as they were nothing.

Inside the shelter, use pets to deal with spiders. If a spider appear inside the pet house influence radius, the pet will run and try to kill the spider. It will only get to do so, if the pet can reach the spider. Very tall rooms isn't suitable for this.

In the mining places, limit the spiders' hability to spread their webs, by building 1 block large tunnels with torches and ladders in regular intervals. The more space you give them, the worst.