Halloween in Craft the World is a special event based on two Western real life traditions: the Halloween celebration and the Friday the 13th's superstition, applying some changes to all worlds, like the zombie waves and featuring a bunch of items which are only acquirable within this time period.

It primarily happens every year around the real life Halloween time[1], including one week before and two weeks after the October 31, i.e.:

The event depends on the system date on which the game is being played to be triggered.

Changing the system date will cause the event to take place or to finish, depending on the date chosen.

During this event, many changes will apply to the base game: 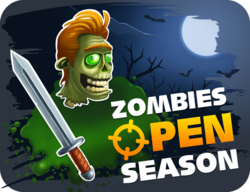 Zombie Open Seasons are mini-events or mini-games that happen every night inside the Halloween event. The game consist in red portal (similar to Monster Portals) opening and spawning mainly costumed zombies, and a zombie number counter. The counter schedule an amount of zombies that must die that night, dividing the objective in 3 stages and giving 1 star for each stage accomplished. The more stars the player get, the bigger will be the reward at the morning.

Each opened portal spawn a random and limited amount of zombies. The player must kill them as fast as possible because the next portal will only open if there is no more zombies left alive from the previous one.

As the items provided are in most cases strictly better than any other item in the game, and will literally drop from the sky without any of the hassle of crafting them, it's highly recommended to use coins and buy mithril weapons, if this technology is not available yet. The 3 stars reward includes a considerable amount of coins, which will compensate part of the investment.

Halloween items cannot be purchased and are not craftable.
Once in the inventory, they can not be disassembled.

Halloween items may be received as:

These items will drop in parachuted boxes around the base (image at the right), and a notification icon (image above) will focus the screen on the packages when clicked. Each box is opened by clicking on it. The items will fall on the ground and dwarfs will be able to collect them.

The house of an old friend

Brain in a Jar