The shaman's staff[1] grants a lightning attack that can chain to three additional enemies. It's the most efficient weapon to crowds of low health monsters (like plain skeletons and zombies), more even than the mithril wizard's Staff.

The shaman's staff increases the efficiency of the mage skill by 60%[2], two times more the bag of elixirs or the witch hat. Not considering the fourth hit, as a combat skill increases the final output damage (if the dwarf is using the correct type of weapon), it is possible that each lightning hit from the shaman's staff deals more damage than that coming from a mithril staff. 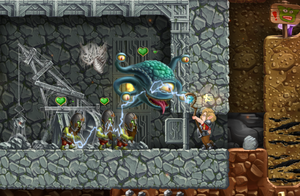 A mage female dwarf hitting 3 restless dwarfs and a beholder with a shaman's staff lightning chain.

This item is one of the possible rewards received after finishing and winning a pvp or a coop multiplayer battle at the Underground Biome. The winner(s) may receive none, one or two shaman's staffs when returned back from the biome to the original world.

This item is not craftable, it cannot be purchased and it is not dropped by the Altar Shaman, that uses a staff in the Underground World.