An object left inside the stockpile A by a dwarf X, may be recovered immediately by a dwarf Y from the stockpile B, no matter the distance between both stockpiles.
A stockpile[1] is needed to store resources. The dwarfs start each new world with one stockpile and after reaching the engineering tech, they can make additional ones.

All resources are kept inside them, and there is no functional distinction between them while storing material.

Stockpiles need a space of 3 empty foreground blocks in a horizontal line. The 3 blocks just bellow it can be replaced by other materials, but not simply removed by digging.

Usually dwarfs access the stockpile content by passing in front of any stockpile — the initial or any of the additional ones. Each dwarf can deposit up to 5 items[2] and take only 1 item from the stockpile at a time.

There are some ways to avoid the trip to the stockpile.

Special items — Some items don't require the dwarfs to move to the stockpile to access them, like:

Direct control — Any dwarf, while being directly controlled by the player, will have instant access to any item existing in the inventory without having to move to a stockpile. It'll require the player to pick the chosen item at the quick bar to give the order, and if the wanted item isn't still in the quick bar, the player will need to open the inventory menu to move it to there. This kind of instant access unfortunately only allows to pick items from the stockpile, and never to put anything there.

Magic collect — To collect things instantly, the player have the option to use the 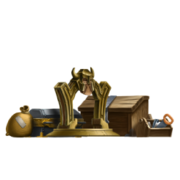 The initial stockpile[3] is established in the center of the map, just after the world is generated and it is not removable. Usually players build their fortress around this stockpile to avoid goblins stealing items from it. Also, the player will have only this stockpile until he/she reaches tier 10 of the tech tree, which may be considered very late game; so, better to keep access to it clean and safe.

The initial stockpile is the connection/returning point of all

The initial stockpile may be upgraded to

improved portal. It changes nothing to the stockpile mechanics, but allow the player to start a multiplayer match search.

Additional stockpiles[4] are removable and disassemblable. In both process, removing it from where it has been placed or disassembling it at the crafting table, 1/3 of the resources used to build it will be lost.

Ghosts will seek for any kind of stockpiles to pick items from it and throw them to the ground, making them unavailable to use. And if there is any

fossilized gargoyle, the ghost will throw it out. The stone piece will turn then into a

totem may help to scare them.