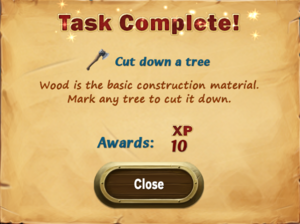 After completing a Task, a pop-up frame with this sound tells the player what he has won: 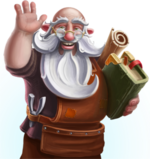 Some Tasks bellow do not appear — or do not appear anymore[1] — in the current Craft the World gameplay, but its records have been found in game files[2]. Even though, it's still interesting to list them here, as, when they're read orderly, they form sort of a guide for beginners. Although the game has its own tutorial, it has been a common practice for beginners just to follow these suggested quests allied with the new Tech Tree crafting path.

The Tasks that are not active in the current version of the game[3] have been set apart to the right column, with no icon specified. The active ones are preceded each by an icon, that is shown in the correspondent in-game situation. 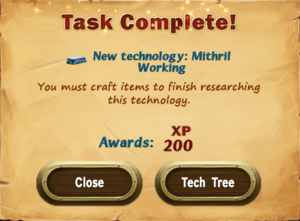 You must craft items to finish research this technology.

When this Tech Tree was implemented, a hole pack of Tasks were created, one for each Technology available, as a requiered step before accessing more advanced crafting techniques. These Tasks were entitled New Tecnology: SOME TECNOLOGY NAME.

Note that all Tasks related to "researching a technology", awards the same 200 experience points, making a huge difference in the early game, and no difference at all in the late game. Building a Railway, in the late game, for example, may awards 256 times more XP[5].

For the required XP amount for leveling up, see Level (Experience).

All Tasks available in the current gameplay award the player with some XP and 1 or 2 items. Only Tasks in the very early game, give only XP and no item at all. The XP values vary a lot from game to game. But they increase substantially in the late.

Cut down a tree[edit | edit source]

Wood is the basic construction material. Mark any tree to cut it down.

Many minerals are deep underground. Mark a downward sequence of blocks[6] to dig a tunnel.

Sand is used for construction and glass manufacturing. Dig out several[7] sand blocks. Sand is very loose, so be careful not to bury the dwarves.

Our future shelter will need strong stone walls that can protect against monsters. Collect some stones[8].

Complete the shelter by putting up a totem in its center. This will scare off monsters and evil spirits. The shelter must be protected by walls on all sides, while the entrances should be covered with doors or hatches.

Most instruments and weapons are produced from iron. Find an iron ore deposit[9].

Put some kind of food on the table, like apples. The dwarves will take the food on their own when they are hungry.

Kill 10 skeletons attacking your camp to gain some combat experience. Mark the nearest skeleton so that the dwarves attack it together.

Find coal[10] deposits, which you will need to make weapons and cook food.

You will need a lot of wood to build ladders and furniture. Cut down 30 trees to save up some wood.

Some minerals are buried at great depths. Dig a mine to explore deeper deposits.

You need to protect the approaches to the shelter so that it's easier for the dwarves to defend it. Build one of the available defenses - a cage or a trap - in the monsters' path.

Dwarves recover more quickly in a cozy home. Improve the comfort of the shelter by placing extra pieces of furniture inside: chairs, windows, dressers, etc.

Increase the personal protection of your dwarves. Make a protective helmet, jacket, or boots and put them on a dwarf.

The stronger the walls of the shelter are, the harder it will be for the monsters to get through them. Replace any fragile earthen walls with stone or brick ones.

To create jewelry and advanced weapons, you will need rare precious metals: silver, gold, and mithril. Dig deeper to find them.

Build a blacksmith's stable to forge stronger armor and weapons. Use hardened steel instead of iron.

Fish is a perpetual, convenient source of food. Make a fishing rod and find the nearest freshwater pond for fishing.

It's more reliable to grow your own food than to spend time searching for it. Plant wheat in the ground and water it several times. Once the wheat has grown, you will be able to gather it and use it for cooking.

Carts on rails can horizontally transport dwarves through mines more quickly. Build a railroad. To place stops along the way, use railway switches.

There are many abandoned mines and rooms underground, and they can contain useful objects. Use a compass spell to point you in the direction of one of these places nearby.

Somewhere under the ground are the ruins of an ancient portal that opens a door between the worlds. Find the portal room and rebuild it. Block recipes will appear after you find it. 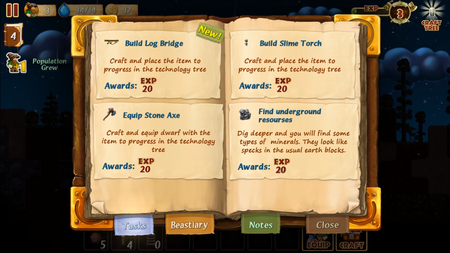 Dungeons are dark and full of various monsters. You have to illuminate the passages that dwarves make with torches. Make a torch and put it inside a passage.

Entrance to the shelter has to be limited for the outsiders. Build a wooden hatch that would cover the entrance.

Climbing through a tunnel can be dangerous and slow without an additional support. Build a ladder and place it in a tunnel.

Start building a shelter. Dig a small cave with a vertical shaft entrance. Build a ladder in the shaft and install a hatch at the entrance.

Give a new weapon[edit | edit source]

Give the dwarves a more powerful weapon than a knife. To do this, click on Equip and drag any weapon available from the stock to the dwarf's gear.

When dwarves are working, they gradually become hungry. Build a table where dwarves can eat.

What dwarf doesn't like good food! Cook an exotic dish for your subjects in the oven.

Animals are not only the source of food, but also of a variety of resources, such as wool. Find in the vicinity of the camp a beast and mark it as a hunting target.

Dig deeper and you will find some types of minerals. They look like specks in the usual earth blocks.

Water is a source for cooking and a component of many necessary objects. Make a bucket to collect water. After that, you will be able to mark water blocks for collection. Having multiple buckets will speed up the process.

Increase the size of your shelter so that all dwarves would have space and beds.

Make a sword from the mined iron, a main melee weapon.

It is important to help your ward when necessary. Use a spell to destroy the monsters, open a portal or grow a forest.

Some objects are particularly difficult to make because they require rare resources. Use dwarves store to get a rare or unique object.

Water obstacles are easier to cross by a bridge. Build a wooden or stone bridge for an easy crossing to the other side.

Create a diving helmet so that dwarves could work under water and collect drowned things without compromising their health. Dwarves put on the helmets themselves when necessary. Several helmets would allow several dwarves to work under water.

To speed up the vertical travel of dwarves from production areas to the storage, dig out a shaft and install an elevator on the top. Each elevator has a depth limitation.