Wooden tower[1] is an automated defense that will attack hostile creatures within its range.

It can be upgraded into a heavy shooting tower.

The tower can be placed on top of any supporting surface. Foreground blocks placed right on top of it may disturb the tower's shots.

Wooden towers deal relatively low damage, apparently on par with the wooden bow used in its construction. Small numbers of them are best used indoors as a defense against ghosts. In larger numbers they can provide long range supporting fire against monster waves, but care must be taken as they can be easily overwhelmed if left unattended. Placing these towers on elevated bridges and blocking the path of monsters with spikes will greatly improve their survivability. 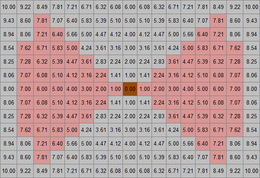 Range and firing arc of the tower.
Numbers indicate distance to the tower.

Wooden towers have a long range but also a limited firing arc. It has a range of 8 squares, firing in a restricted arc within ±45° of the horizontal. The tower cannot attack enemies along the diagonal. Arrows fired from the tower will be obstructed by solid blocks, but they can otherwise pass through bridges, ladders, other towers and dwarfs.

In biomes, one of the boost rooms features a tower icon when the fog of war still covers the place.

Opening the chest of this boost room may drop: